Living a monastic lifestyle allows us to encounter as few distractions as possible, so we can concentrate on learning for the benefit of all sentient beings. All the monks of the Khangtsen are students of Sera Jey Monastic University, persuing various levels of the Geshe Degree programme. It takes anywhere between 15 to 20 years to complete the Geshe Degree, all after the ordinarie schooling (for the young) has been completed. The monks attend daily philosophy classes and also debate session and general prayer session and assembly as per Monastic University academic and religious programme. 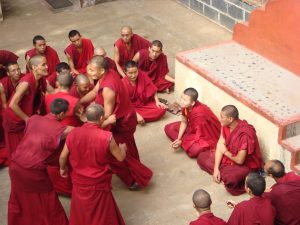 By studying we not only become more learned, but indeed this is of benefit to all of mankind; we help the world by:

It is also noteworthy that the monks are required not only to pursue theoretical study of the philosophical text books and commentaries but are also required to debate and discuss the meaning of these texts and more importantly to contemplate on these in meditation in the stillness of night when there is no noise and other distracting elements. So the monks’ accommodation plays a important role in the success of their philosophical study as well as spiritual practices.

Debate is a method for the precise analysis and examination of our external and internal worlds.

It’s a fascinating process of inquiry and examination of all things that can be known. It’s where the inquisitive and clever set forth hypotheses for vigorous analysis in the pursuit of wisdom, where the person who is debating (the challenger) and the listener (the defender) together work diligently to use reasoning and logic to dispel the affliction of ignorance impairing us all.

Debate begins with the challenger standing and a defender sitting.

The challenger starts the debate by putting forth a thesis for the defender to agree or disagree with. The challenger skillfully tries to steer the defender through a systematic method of circular logic, to find faults in incorrect assumptions. Debate is spirited and lively with the intention of waking up the mind and dispelling laxity in the student.

Debate is a fun and challenging way of study. Debate is traditionally done outside in the fresh air. For young monks to get out of their dark classrooms and go outside for some lively debate-study is truly magical, and their favorite part of the day.

Initially students learn to debate using simple forms, colors and shapes. This is accompanied by movements, hand clapping and so on. The students learn how to use definiendum, definition and examples to navigate through the debate terms and phrases.

In the beginning, students mostly work with memorization of terms. Before students can and are allowed debate, they must acquire a reasonable vocabulary and familiarize themselves with the very precise language used in debate.

Actual deep philosophical debate begins later in the educational process: once mastery of the dialectic method has been achieved.